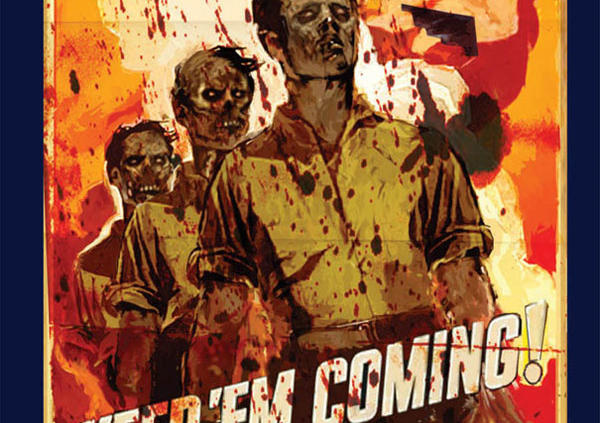 With the occupation of Iraq persisting years longer than expected, U.S. soldiers continue to be redeployed for their third and fourth tours of duty. Meanwhile, the country continues to spend billions of dollars on the operation, while simultaneously hitting thousands of Wal-Mart parking lots to find a possible remedy for tumbling enlistment numbers. To understate, the problem is a sticky, unimaginable mess, so leave it to the comic book medium to find the perfect solution… Zombies! It seems so obvious now.

For the record, I’m not a huge fan of the zombie genre. Even its best yarns are fairly repetitious. If you’ve seen one then you’ve seen them all. I understand that the genre presents a perfect vehicle for exposition on how the human race behaves when all its creature comforts, both material and administrative, are stripped away. The only problem is, nearly every zombie story I’ve ever seen/read have basically gone the same way:

A group of survivors find each other, take some sort of protective shelter, said shelter is inevitably breached (usually due to an arrogant or selfish act from a particularly shaken victim), then the group scurries to find a new place of safety. Granted, the framework is entertaining, but it’s also incredibly predictable.

All of that said, despite its relatively shallow presentation, Zombies of Mass Destruction works somewhat well, mostly in part to its creative premise. While the idea of the establishment inadvertently creating zombies has been broached before, the idea that the U.S. government would stoop to such intentionally drastic measures feels marginally fresh. Kevin Grevioux (creator of the movie Underworld) explores the concept thoroughly, making for a mostly entertaining examination of how the rather far-fetched plan of action could work.

That said, this first installment does seem a little too preoccupied with selling its premise as viable as opposed to introducing or cultivating characters and plot. The issue is interesting on a theoretical level, but seems more like an extended prologue than a fully developed inaugural issue. The main characters aren’t introduced until the last few pages, while countless sequences drag on well past the moment of successful explanation.

Geraldo Borges’ pencils are admirable, which is made all the more important by the book’s abundantly wordless pages. There are times in Zombies of Mass Destruction where Borges becomes the sole storyteller and for the most part he handles the duties respectfully well. There’s a particular six-page sequence where Borges is forced to explain how the zombies are kept under control by the army without the benefit of a single word. He pulls it off without a hitch, paving the way for a soundly told story.

It will be interesting to see how people take to Zombies of Mass Destruction. Ostensibly, the book casts the U.S. as the villains– a brave move on Grevioux’s part, albeit, somewhat indicative of an increasing segment of the American sentiment. I’m cautiously intrigued to see where Grevioux takes the story from here and remain hopeful he can build off of this first issue’s serviceable potential by telling a less expected, more original take on a tired genre.