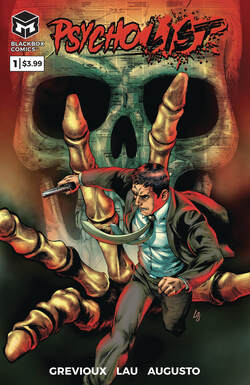 Rating: 9/10
“Do you know what it’s like to walk the corridor of a man’s mind? What it’s like to search his darkest desires or see his innermost feelings laid bare like an open oozing wound? To view him as an open book ready to be read like a cheap paperback novel.”

In his dream, we zoom into a patterned abyss where former FBI agent, Dr. Donovan Priete, falls in his own depravity. A flashback of 1985 appears on the next page as he’s holding his two younger siblings, crying in despair. “This is a bad one, Donny.” They hear their father smack their mother so hard they can’t stop listening in the room with their ears covered. Donny hugs his brother and sister as he tells them to ignore it, yet the three children creep down the stairs as they hear a slam. Their mother faces the floor as blood spills around her, and the children each get a punch portrayed in haunting shadows as Donny awakens at 5:30 in the morning.

“That’s just life, things happen,” as he likes to call it. His day always begins with the night his mother was killed, then he strolls along for breakfast, and walk a thousand yards to his job. This is the overall nonchalant feel of Psycho List. There is no sinister vibe or a smart, sarcastic script. It’s raw and straight-forward French cinema where people talk before the backdrop of Donovan’s daily life – in his office, at the FBI HQ, or in a nightclub after being dismissed by a woman he’s been and hasn’t been seeing.

This story is written by Kevin Grievoux, an actor and screenwriter of the infamous Underworld, while the talented Jonathan Lau gives us a medium-heavy ink on his messy drawing that gives us a gritty, IDGAF look! The complexly-mixed myriad of vibrant colors by Adriano Agusto shows a balance of saturation and flatness to it that pairs perfectly well with its white gutters (he loves coloring superheroes!). This makes it feel like it’s not too trying as this book is already freaking dark. The closure of panels allow your eyes to transition soo smoothly like watching television, and the panels are creatively organized as half-page panels sit behind a few shorter ones in the front, allowing you to hop back and forward in different scenes to immerse yourself in the story.

All portions of this creation dance smoothly together making it pleasing to the eyes, and the harmony of both the gloss and mattness on paper makes it feel like a true indie book – one you can beat up easily and read over and over. This contrast is metaphoric to the likeable yet psychotic character of Dr. Priete – we’re not done yet!

As the story unfolds, one of Priete’s patients come to him with a bruised face, and reveals that her six-feet, seven husband is beating her. We later see Priete being a superhero of his own as he outwits this motherfu–er at a bar to show him a lesson. But there’s more to this, and this densely packed comic has a ton of twists and turns that’s begging to be answered in the next issue! What I enjoyed most about this book is the anti-hero story that’s familiar yet still original in its lasting pages. It truly captures how haunting domestic violence can be, yet gives a sense of empathy for these affected characters. It’s put together well in all areas, and the closure in transitions really makes for an enjoyable reading experience. Im glad it’s more genuine than it looks than it’s stylized cover, because we need more indie comics like that.