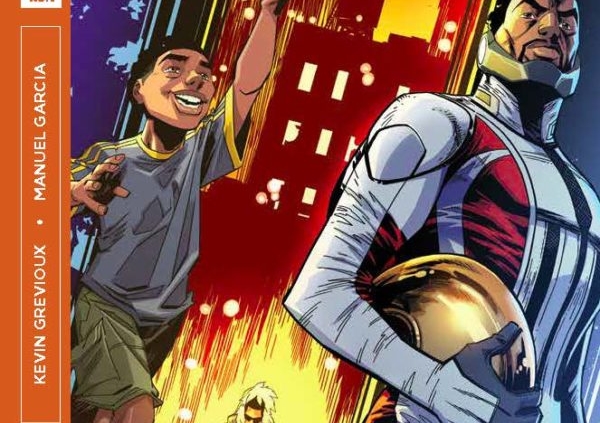 This week saw the release of the collection of the third Noble TPB, and the launch of a new arc with a new writer.

Kevin Grevious, creator of Blue Marvel and who played Raze in the Underworld franchise, has taken over from Brandon Thomas on the comic, which will dive deep into both David and Astrid’s backgrounds, and establishing them in a much more significant way than previously.

CATALYST PRIME NOBLE #15
(W) Kevin Grevioux (A) Manuel Garcia, Le Beau L. Underwood (CA) Khary Randolph, Emilio Lopez
Long before he became an astronaut-much less a superhero-tragedy struck David Powell’s life and set him on the path that will someday lead him to becoming Noble. Past, present, and fate collide-with a little help from nefarious government forces-and the impact will be felt for years to come. In Shops: Feb 06, 2019
SRP: $3.99

CATALYST PRIME NOBLE TP VOL 03 NO ONE MAN
(W) Brandon Thomas (A) Le Beau L. Underwood (A/CA) Manuel Garcia
Former astronaut David Powell is coming to grips with his incredible and increasingly powerful superhuman abilities, and the world around him is reacting to seeing a Black man wielding such enormous power-but not everyone is a fan. As tensions rise among some factions of society and Noble endeavors to do whatever it takes to continue the life saving work he is committed to, Astrid focuses her attention on the reemergence of a savage adversary. Foresight agents are dropping dead around them, hunted by a deadly assassin, and only Astrid and Lorena know the shocking truth behind the man responsible.In Shops: Feb 06, 2019
SRP: $14.99

Kevin Grevioux On “Closing Out” The Final Two Issues Of Cyborg

COMIC DISPLAYS GOING INTO OVER 3,000 WALMART STORES NEXT TUESDAY
Scroll to top