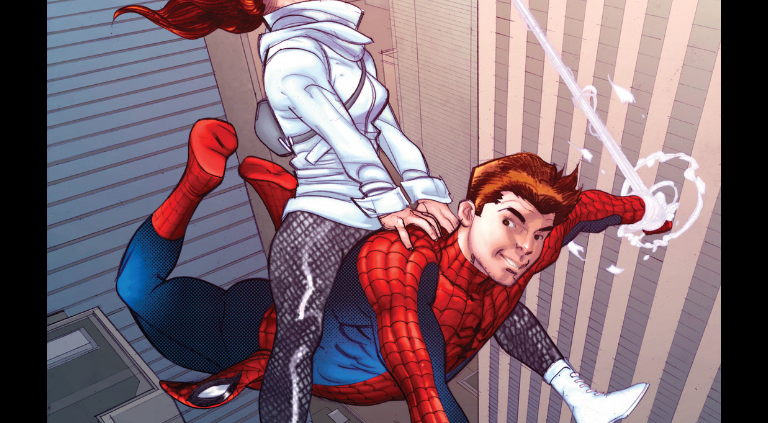 During the month of December, Marvel fans were given the opportunity to travel back in time and revisit a world where Peter Parker was Spider-Man once again. But now, with issue #700.5, that brief visit has come to an end. However, unlike the last time he left us, Pete goes out with a good laugh.

In this last issue of ‘Amazing Spider-Man’ (for now?), Spider-Man teams up with Marvel’s First Family, the Fantastic Four. When Peter’s old friend Johnny Storm bursts into his apartment declaring that he needs help saving the universe, it’s a bit hard for Spidey to pick the comforts of his own bed and a good night’s sleep over the lives of billions. So, with the help of Mister Fantastic, The Thing, Invisible Woman, and Mary Jane Watson, our heroes come together to stop this massive threat that turns out to be more (or less) than they expected.

Since the conception of the character, a core element of the Spider-Man mythology has been comedy. From his quips during battles to his dumb luck in just about all aspects of his life, Peter Parker is nothing if he isn’t funny when the situation calls for it. Hell, even when the situation doesn’t call for it! The two other main stories told in this series have been fairly serious, so I’m glad that Brian Reed was able to present this lighter story to end things on a high note.

Even though I don’t pick up ‘Fantastic Four’ very often, some of my favorite parts are the shenanigans of Ben and Johnny. This story is definitely full of them, which then lead to some literal laugh out loud moments. I recall specifically cracking up at the bits about the beards.

Also, another big thing that I enjoyed about this story was Mary Jane. First, in terms of artwork, John Romita would be proud of Sean Chen for the awesome reveal of the gorgeous Miss Watson. Then, seeing her interact with Peter and the gang was a sight for sore eyes. While I’m enjoying ‘Superior Spider-Man’ and Octo-Pete’s budding romance, I do miss the classic couple of Pete and MJ every once in a while, so it was really nice to see all of that here.

But with all that being said, this issue included a supplemental story as well. Written by Kevin Grevioux and Lee Weeks, they might as well have just taken my heart out and stomped on it. It was a beautiful reminder of why heroes do what they do, even if the heroes themselves don’t believe it at the moment. I can’t stress enough just how heartbreaking this story was. But nonetheless, it was a great way to wrap things up. Sure, it wasn’t the happy, warm, and fuzzy ending that people were expecting, but just like in life, things don’t always work out how you want them too. And like comedy, Spider-Man wouldn’t be Spider-Man without tragedy like this one. But at the very end of it all, if this showed anything, we got to see that even if he doesn’t think that he lived up to it, Peter Parker was reminded once again that with great power comes great responsibility.

In comics, no one stays dead (except for Uncle Ben, Thomas & Martha Wayne, and Gwen Stacy). Because of this fact, I know that the real Peter Parker will be back under the mask once again. It may not be right away, so this brief reminder of him was a refreshing change of pace from the epicness that Dan Slott has going on in the main Spidey book. If they decide to keep Pete away from us even longer, maybe Marvel would consider doing more of these in the future.